I’d love to say that first night was uneventful. It wasn’t…. something happened, something that’s scarred me since and may do for the rest of my life. And ‘no’, I didn’t get a midnight visit from an amorous Mr Harris!

I’d awoke in darkness, in the middle of the night, with a desperate need for a call of nature. The ‘nature’ part of that sentence was about to become all very real. So headlamp on, tent unzipped and out into the freezing cold blackness of Scotland at 1000m. If I’m being honest, I didn’t look where I was ‘going’… I didn’t care… I just wanted to get back into my sleeping bag as quickly as possible. But when I did look, the light of my headlamp fell on a steaming waterfall of you know what, that was giving a rather startled-looking FROG a midnight golden shower. Pissed off and Pissed on all at the same time for Mr Frog.

The thing is he didn’t rush (hop?) off straight away, so in the part of my brain that tries to justify the unjustifiable keeps telling me that he actually liked it. But hop away he did, eventually, with a brilliant story to tell his froggy mates down the pub.

I awoke in the morning with the lyrics of a famous Katy Perry song in my head, albeit slightly twisted – ‘I pissed on a frog… and I liked it’.

Sticking my head out of the tent, I couldn’t seeing any frogs. To be fair I couldn’t see a f*cking thing! The clag had come down and I could just about see my hand in front of my face. The clarity and ‘see for miles’ view of the evening before had gone completely. We were in a surreal cotton-wool world of mist and whiteness.

Porridge oats for breakfast of course. When in Rome and all that!

We’d camped by Lochan Uaine, around 50 metres from Stob Poite Coire Ardair ‘The Window’ and this cleft in the landscape was to be the start of our route back to the car. Only 50 metres, but if not for Tony’s exemplary navigation skills who knows what we’d have end up at the bottom of!

Anyhow, found it we did and the treacherous descent began, not helped by extremely limited visibility. I only fell down once in the first of what was going to be a few days of leaping from rock to rock. It really hurt. I looked at it and saw ‘a hole in my leg, bleeding like bastard’, Tony looked and saw ‘a scratch’. Twat!

A bit later at a particularly tricky section Tony said ‘I was losing my bottle’. I told him to ‘F*ck off and that I was finally get used to it’. Two seconds later my water bottle fell out of my pack and bounced down the mountain. He just smiled at me. Twat!

The clag cleared somewhat as we reached the bottom of the window and Lochan a’Choire, giving some spectacular views back up the towering cliffs of Coire Ardair. The next hour or so was spent in beautiful conditions as we following the sparkling Allt Coire Ardair through the Aberarder Forest and back to the car.

A quick change of clothes, some re-packing, some redistribution of gear and we were on our way to Aviemore, The Cairngorms National Park and the start of what was planned to be a 3 day hike.

We arrived in Aviemore at around 11am, smashed our way through a few pasties and sarnies at Tescos, grabbed a map (for me) and then drove the couple of miles to our starting point – The Cairngorm Ski Resort.

The plan for the day was to climb Ben MacDui, the second highest mountain in the UK, before camping on its far side by Lake Etchacan.

My pack was infinitely more heavy now. More clothes, more food and I’d remembered to pack my jetboil too. It was easily the heaviest I’d ever carried. 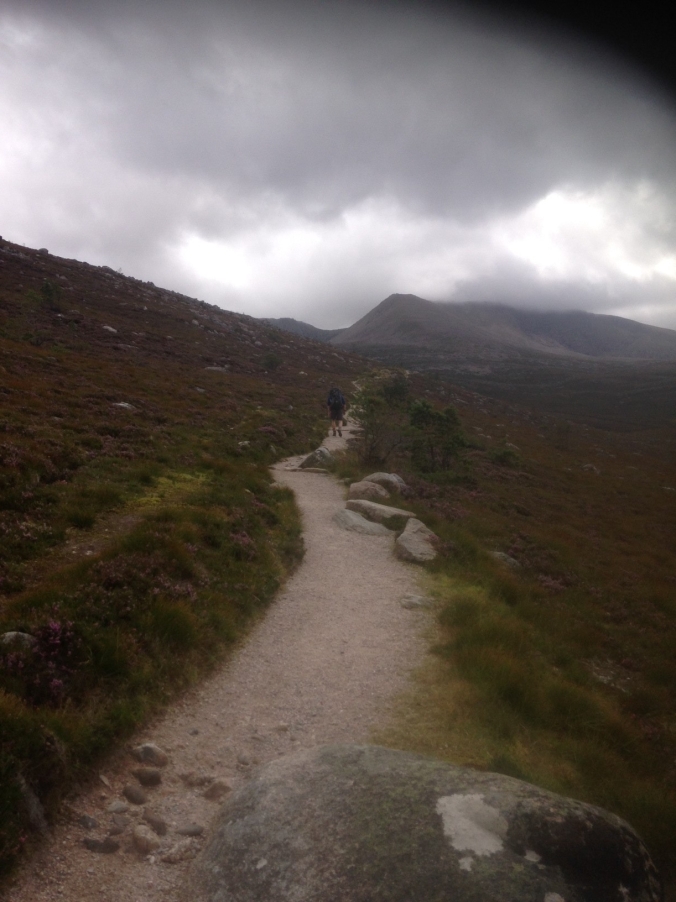 And it soon told, Tony was a few hundred metres ahead of me within the first half hour of our walk. It was tough going as it was and that’s before the monstrous ascent that was Stob Coire An T-Sneachda appeared before me. 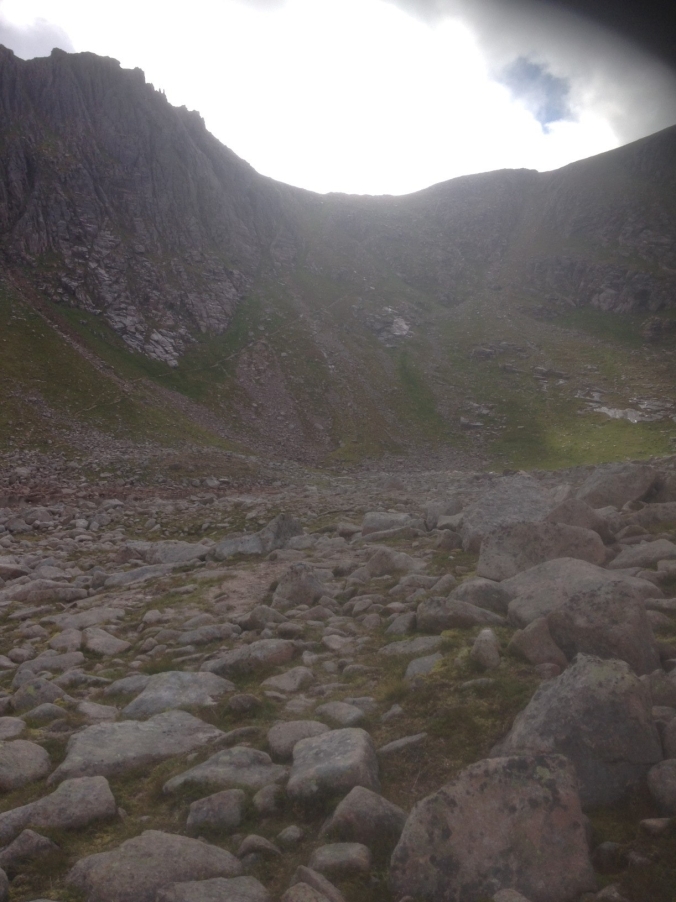 ‘F*ck! We going up THAT?’ I enquired, with more than a hint of hope that we weren’t.

We were of course. Coire An T-Sneachda is a pretty vertical climb of 150metres. The pics just don’t do it justice and I was cacking it ‘big time’ all the way up and nearly fell over backwards at one point due to the weight of my pack. But made it I did. 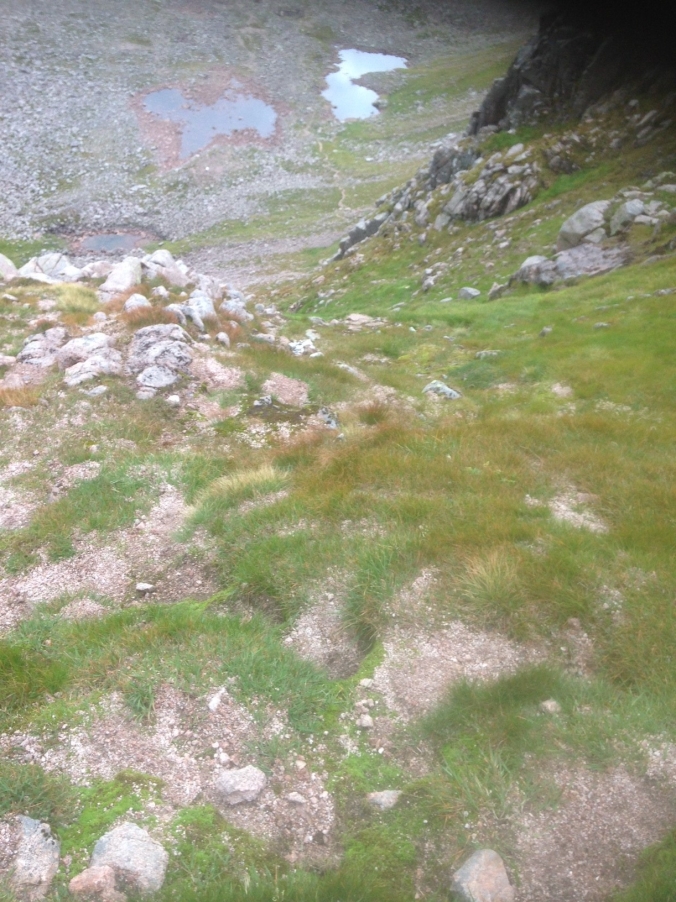 Looking back down Stob Coire An T-Sneachda

It was almost worth it on top. Coire Domhain stretched away in front of us, our route to the top of Ben MacDui – a long way away in the distance. Whilst up to our left was Cairngorm itself (one for another trip – by cable car I told myself).

A random encounter at this point with a ‘totally not dressed for the occasion’ German couple occurred with them asking if the way we’d just come was the way to the top of Cairngorm. Really? Is a steep-as-f*ck 150m drop the route to the top of one of the biggest hills in the area? No map, no proper clothes and no idea. We tried to talk them out of continuing onward, but when that failed we pointed them in the right direction – ‘that will be upwards’ and left them to it.

Trekking across Coire Domhain we counted a herd of 15 deer including one big ass stag – standing imperiously in guard of his harem of does.

What followed was a long hour or so across one of the highest plateaus in the UK as we slowly climbed up to the top of Ben MacDui, past a long trail of cairns, along with a fair few hardly souls. It’s a bit of a tourist trail in the Summer, but only the (fool)hardy were out today. 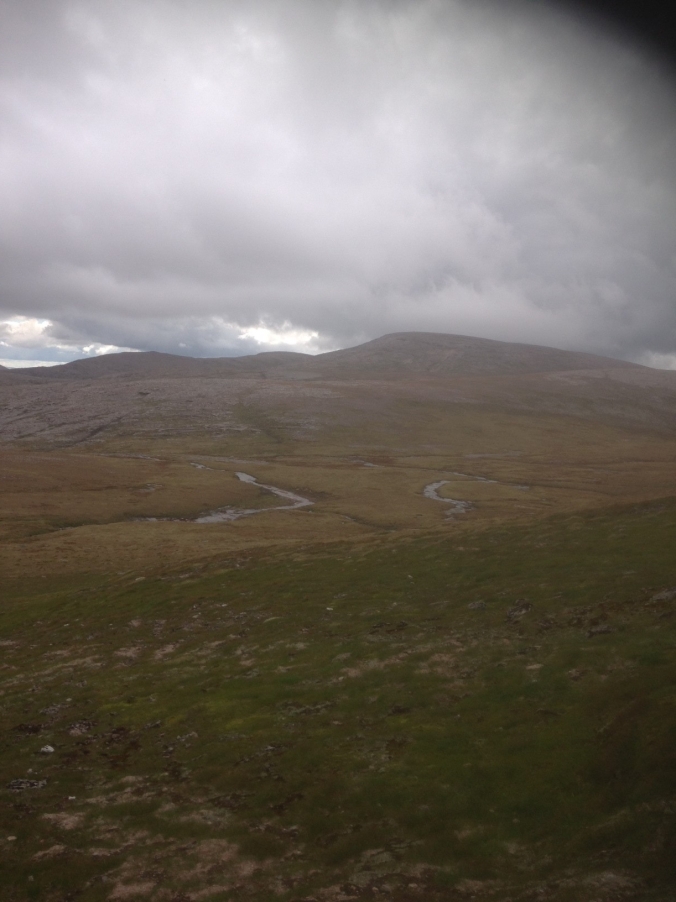 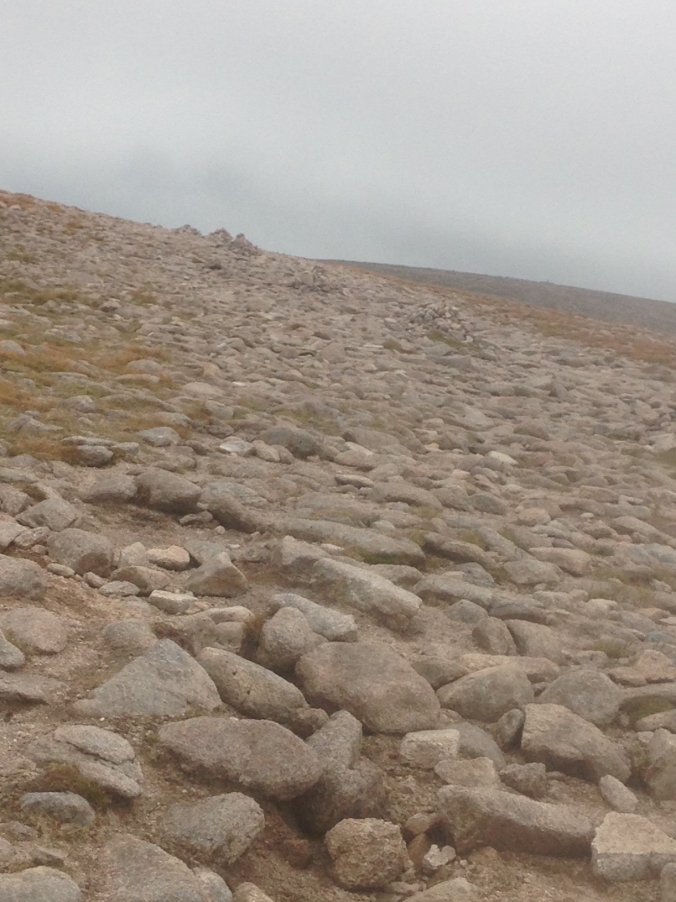 The cairns lead the way

We hit the top at around 3.30pm and found a couple of lads, laden with lager, taking turns to stand on top of the trig point itself. They turned out to be ok really, with their own tales of battles vs the midges. No frogs mind!

They finally moved on and the obligatory pic on top took place. 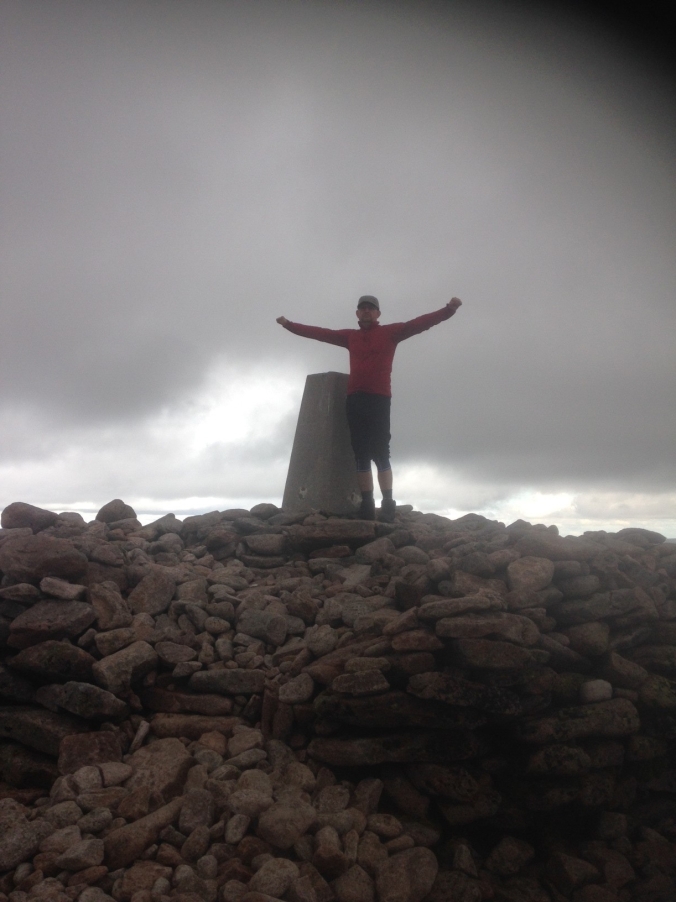 Trig on top of Ben MacDui

Our camp site was up and over the top of Ben MacDui. An awesomely picturesque location on the banks of Lochan Etchacan surrounded on all sides by some giants of the Scottish Highlands. Mount Cairngorm is in the far left in the distance. 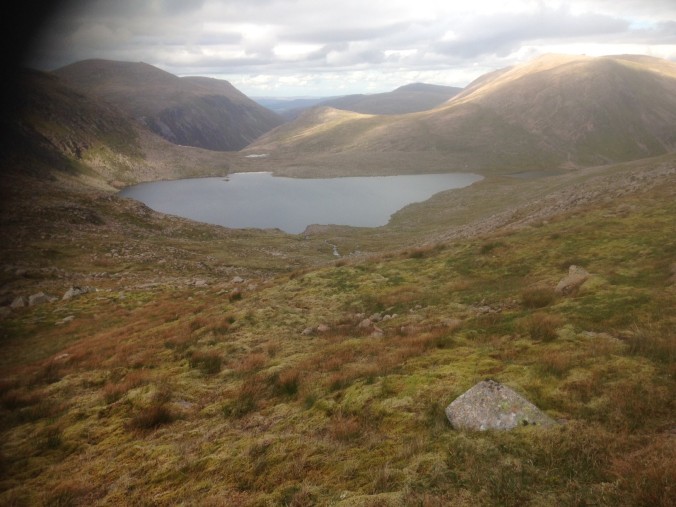 Looking down to Lochan Etchacan 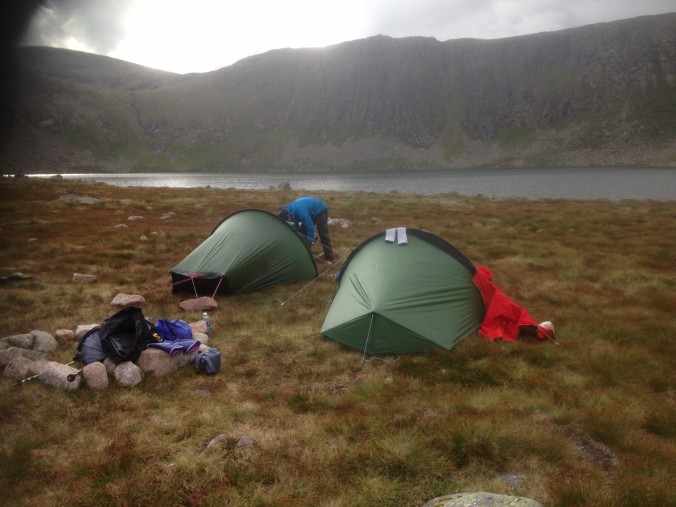 Camp site. Ben MacDui. In the distance on the left.

We made good time. In camp, tents up and sorted for half past 5. The plan being to smash through some snap before our midgety-f*cky-friends re-appeared. We just about made it to be fair, albeit the tranquillity of our ‘middle of nowhere’ location was shattered by the appearance of a noisy family and a noisy barky dog who went and pitched about 100m away from us. They had a small tent so I had fun, when the midges appeared, imagining all four of them and the dog rammed into that small space. 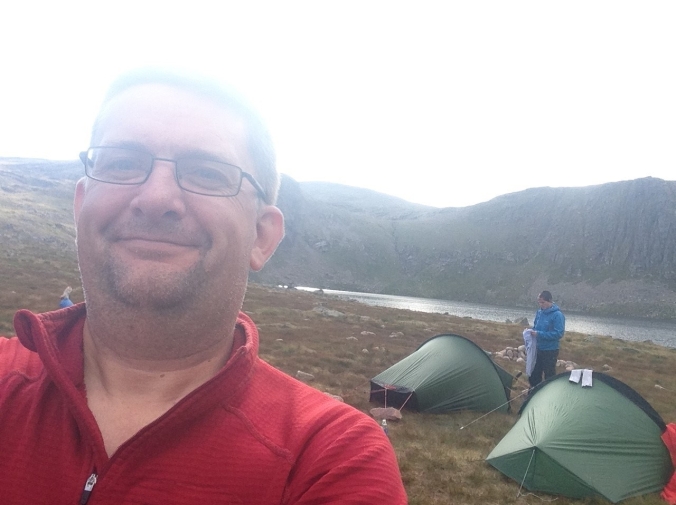 Two days done. Two to go. Or so I thought. The next day was to be the most challenging I’d ever had on the hills.