My Facebook Memories App kicked in this morning to remind me that it was four years today that I did my first and, to date, only National Three Peaks Challenge.

It took over 30 hours, but I did raise nearly £3k for a Children’s Charity I-CAN.

It seems so much longer than 4 years ago and was a day of ecstasy and agony. The ecstasy I remember, but the agony I’ve probably forgotten… which is probably why I’m down to do the Challenge again in 5 weeks time… Eeeek!!!

Reasons I shouldn’t do the N3P Challenge again:

I’m closer to fifty than forty in age now. Yes, it’s hard to believe I know!

My kids can now run faster than me

I had a mild case of sunstroke / delirium last time

I seriously hurt my back in 2013 – leaking spinal disc fluid no less.

It’s a seriously long f*cking way. Up… down…. and in the car.

And we might miss England playing in the Quarter Finals of Euro 2016 (hahahahahahahaha…. as if we will get that far!) 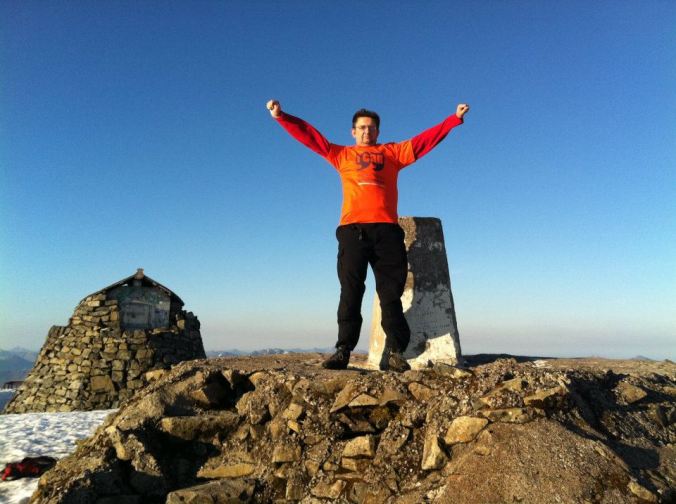 On top of Ben Nevis. All is good.

Reasons I should do the N3P Challenge again:

I stupidly said that I would! And I do wanna smash the 24 hours barrier.

I’m now thinking I should’ve made up a pretend ‘holiday’, like The Walking Dan has done. He said ‘I’m going to Greece’ quicker than he says ‘not me’ when it comes to deciding who’s turn it is to drive to Wales/The Lakes/The Coast or who’s turn it is to get the beers in. I’m not judging him, I’m just jealous that I didn’t think of that one. B*stard!

But seriously, I am looking forward to it. I probably shouldn’t be because it was hard last time, really hard.

There are some things in my favour this time. Here goes…

Reasons I should be confident:

Fore-warned is fore-armed. I was like a child last time, but I’ve grown up a bit since.

I’ve got better kit. I think I did the walk in pumps, jeans and beach shorts last time

My toenails have grown back, albeit they look like they belong to a very un-selfconscious witch.

I’m fitter than I was back then. Much fitter. I’ve lost at least a stone, of which at least 13lbs of that was in chins!

I’ve got a lot more miles under my belt since. I’ve been up and down Snowdon nearly a dozen times now. I’ve done the Yorkshire Three Peaks Challenge 4 years in a row. I’ve traipsed just about everywhere there is to go in The Peak District. And a few hills done in The Lakes too.

I’ve got the inhuman, running man, warrior, machine that is Tony Harris with me again. He went up and down Snowdon twice last time. Once by himself, whilst I was being a lame dog in the van having a rest – and then once again with. He’s actually doing the Challenge the week before he does it with me, with a bunch of guys he works with. Like I said, ‘he ain’t human’!!! 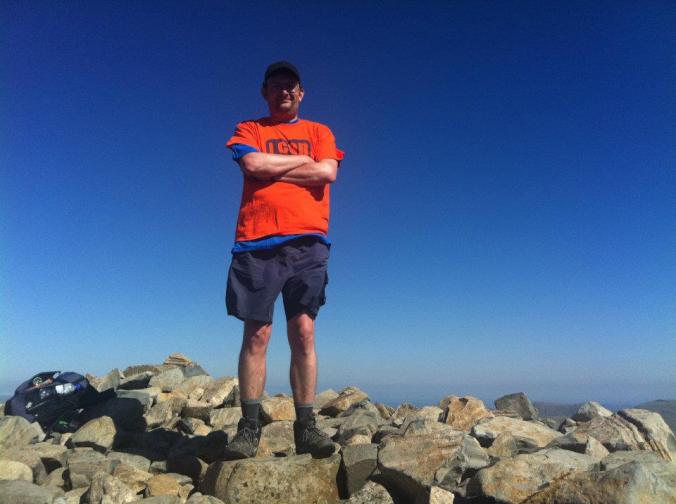 Top of Scafell Pike. All is NOT good!

Treat Scafell Pike with a bit more respect. It’s the shortest of the three, so I thought it would be a piece of piss. It ended up chewing me up and spitting me out with contempt.

Don’t wear a black hat on the warmest day of year whilst climbing England’s biggest hill. Tony still, quite rightly, rips it out of me for this one.

Don’t carry as much crap this time. I’m just taking the essentials. The small piano I had in my pack doesn’t have to go this time.

Take more water and drink more water. Dehydration on ‘The Corridor Route’ coming down from Scafell Pike is one of the worse things that has ever happened to me.

Don’t slide on my arse down a shale scramble. After surviving, virginity intact, a night in van in a remote part of Scotland with just Tony for company…. I then nearly lost it to a sharp, probe-like piece of shale slipping and a sliding down from Scafell.

Don’t go the longer, but slightly easier route. Every step counts, so it might be harder and steeper doing Scafell from Wastwater or Snowdon via the Miner’s Track, but it won’t feel like two steps forward and one step back.

So plenty of reasons to be confident and many lessons learnt last time.

And let’s face it, I’m the Walking Dad now and therefore unf*ckinstoppable!

So f*ck you Scafell Pike, I’m looking to slay some demons this time and you’re top of the list.

Any additional hints and tips are most gratefully received. And sorry for all the swearing.

One thought on “National Three Peaks Challenge – 4 Years On”