The long Easter Weekend saw me take my boys, Chris and Alex, up to Bolton Abbey in the Yorkshire Dales. It was our first ever visit together, although I’d been there just the month before on a bit of a recce with Andy K.

The trip across the ‘Valley of Desolation’ and up to Simon’s Seat from Bolton Abbey with Andy K had been one of a series of ‘walking in total crap weather’ walks that typified my late Winter trips. The River Wharfe had been swollen to bursting point on this last visit, to the point that the riverside paths were flooded in places (requiring some swift scrambling up steep bankings from the pair of us) and the world famous ‘Strid’ was a few feet under water as the Wharfe filled the entirety of the valley floor – truly amazing. Check out the before and after below. 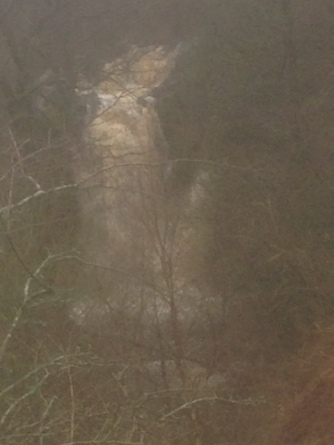 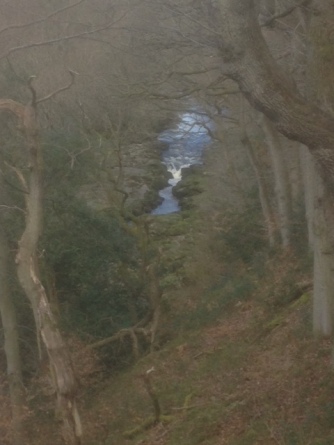 Thankfully the weather was much improved on my visit with the boys. The journey up took around a hour and fifteen – about the limit of their patience, even with books/tablets, before they start getting cranky. It was just us today as poor old Debbie was house-bound with the beginning of a back injury that would plague her for the next two months.

No trekking up into the hills for us this time. The plan was to walk up the right-hand side of the river, before crossing over at Barden Bridge and coming back on the left side past The Strid.

We got to Bolton Abbey mid-morning, paid the small fortune to park by Cavendish Pavilion in what was, at the time, a relatively quite car park.

Setting off we collected a competition sheet at the Pavilion and were tasked with finding a host of Easter Bunnies on our return trip past The Strid. 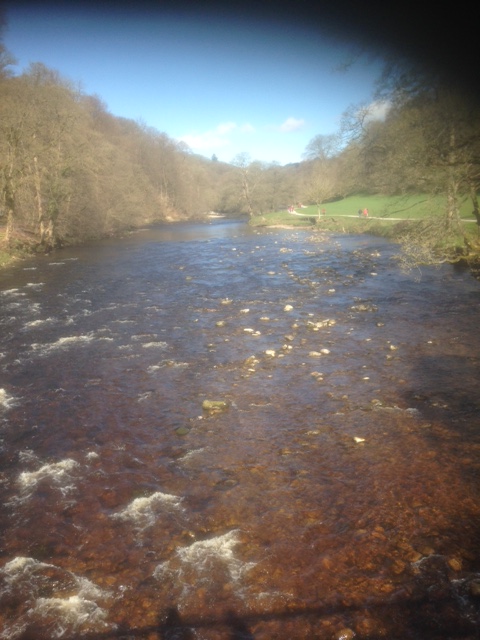 Passing over the footbridge by the Pavilion the River Wharfe had become a stream, a mere trickle compared to the swollen and scary beast it was just a few weeks before. We turned left towards Strid Wood, ignoring the signs for the Valley of Desolation despite Chris wanting to go and see if Smaug was home.

The kids were in good form. I do think their mood improves if they are by water – and mine to be fair. I even got them posing for a few photos together! 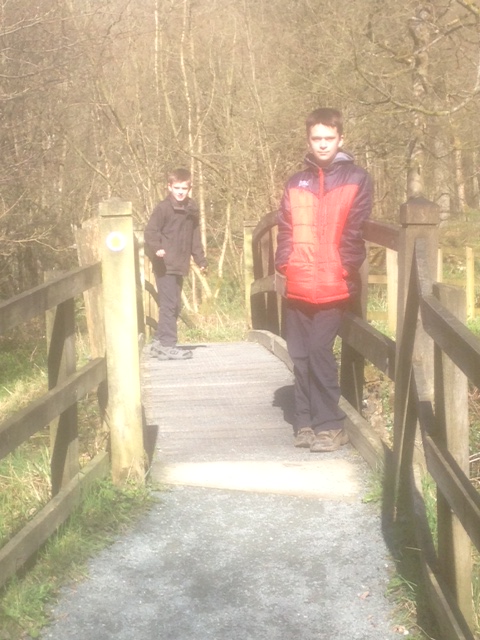 The walk through the wood leads inexorably upward giving some breathtaking views down over the river.

Alex was wearing in some new walking boots and they weren’t particularly agreeing with him as he’d took a couple of tumbles up on the heights. All a little worrying, given the steep drops we were skirting.

I had, as mention before, planned to go as far as Barden Bridge but changed my mind when we got as far as the aqueduct. The boys seemed okay, but I didn’t want to take the risk of tiring them out. 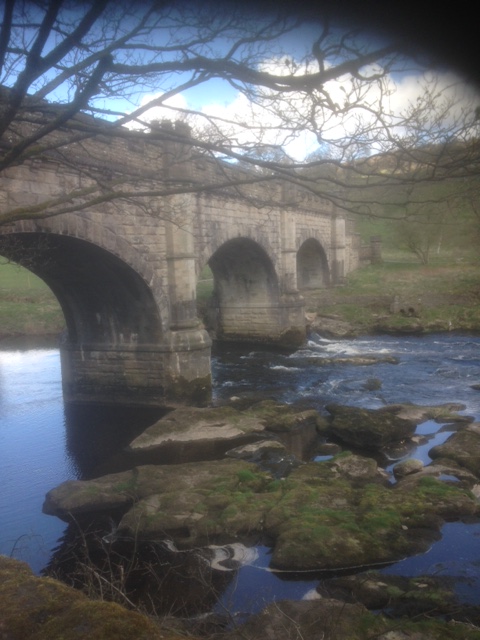 We were heading back towards the Abbey now and would be passing The Strid. The Strid had been completely under water on my last visit so I was happy to find it back to it’s usual state on this visit. 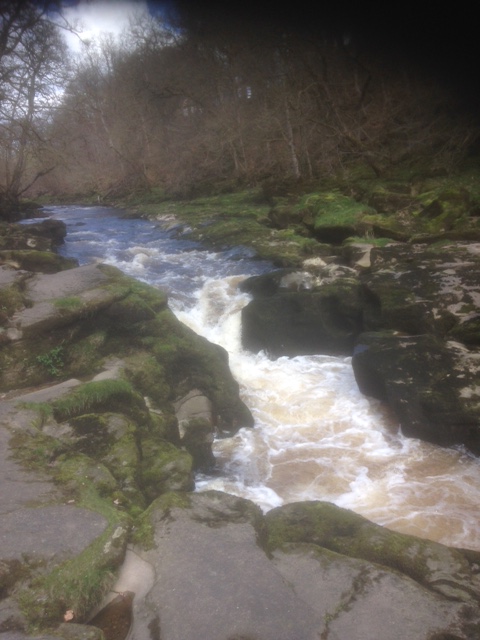 The whole of the width of the River Wharfe is squeezed fearsomely through a set of cataracts only a few metres wide. It always looks eminently jumpable (or stridable?) and there’s always a voice in my head screaming ‘jump it’ every time I’m here. But it’s not a good idea as the rocks are slippy and the depths deep, with failure historically proving fatal, unfortunately, for those foolish enough to try it. I kept the kids well away from it as I could see Chris sizing the ‘stride’ up in head. 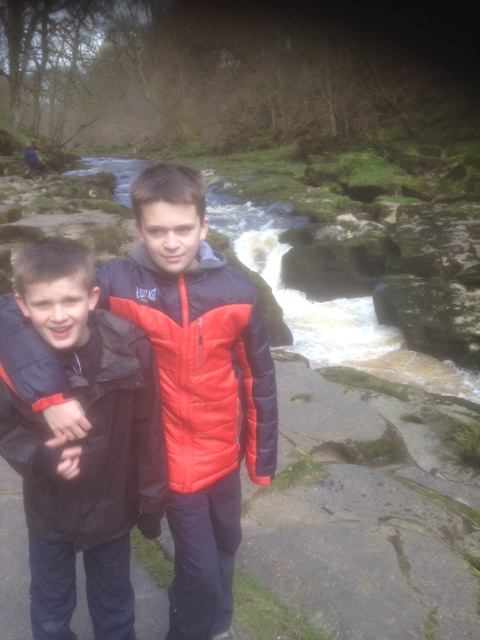 Step Away From The Scary Place.

We found a rock and had a couple of snacks and a drink to keep us going and then started our Bolton Abbey Easter Bunny Competition. Basically we had to find all the ‘hidden’ 4 foot tall Easter Bunnies, recording their names on our sheet.

So for the next mile or so we were introduced to Benjamin, Bertie, Bluebell, Betty, Boris (boo!!!), Bonnie, Billy, Betsy, Bobbie and Bella. As well as some humongous easter eggs resting precariously on the branches of riverside trees. 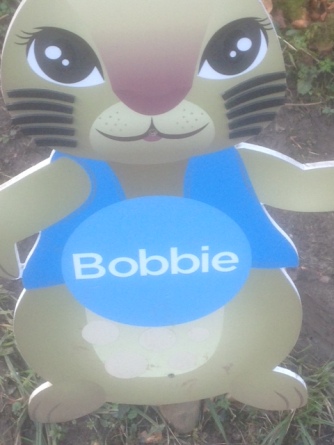 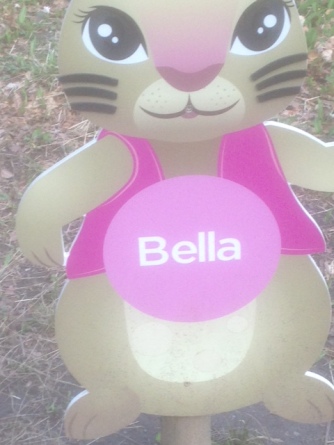 Anyhow it kept me amused for half a hour or so. Chris and Alex were much more interested in chucking sticks into the river, counting ducks and climbing over rocks and up the riverbank. 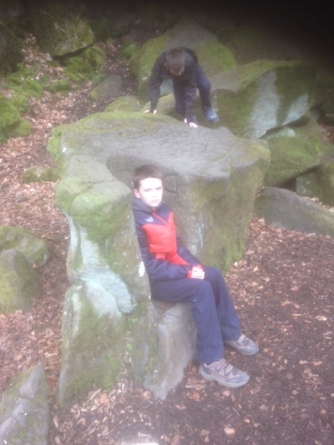 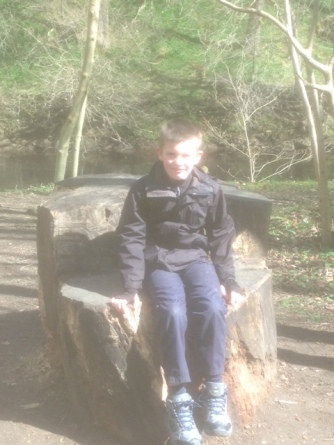 We stopped at the very busy Pavilion for a bank-bursting lunch, popped some gear back in the car in a now rammed car park and set off to Bolton Abbey itself.

We crossed over the footbridge again to walk down the path on the opposite side of the Abbey. Or at least we tried as Alex fell over, he got up quickly and went down again even quicker. And then again! I’d seen better balance on a drunk. This could have gone on for a while until he discovered that one of his lace on one foot had gotten wrapped around the top hook of his boots on the other foot. Comedy gold if not for the fact that it probably hurt a bit and we’d attracted a bit of an audience by now. I took over shoe-lace fastening and the trip continued. 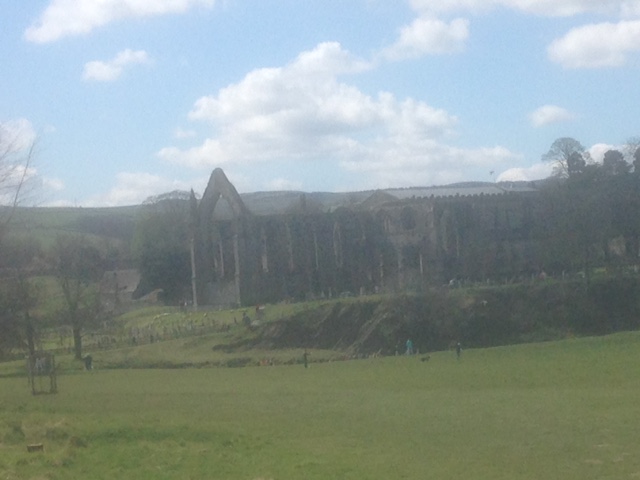 The weather had improved dramatically at this point which possibly accounted for the mass influx of new cars in the car and gave some great views over to the Abbey. 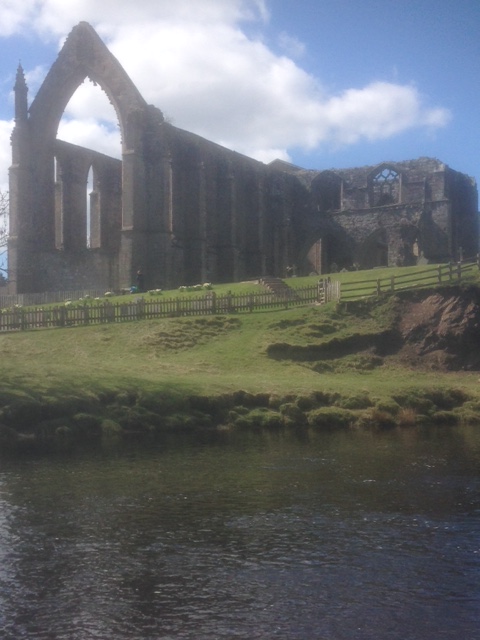 We walked up and through the wood opposite the Abbey and then down onto the little beach. Yup! There’s a real-life sandy beach here. 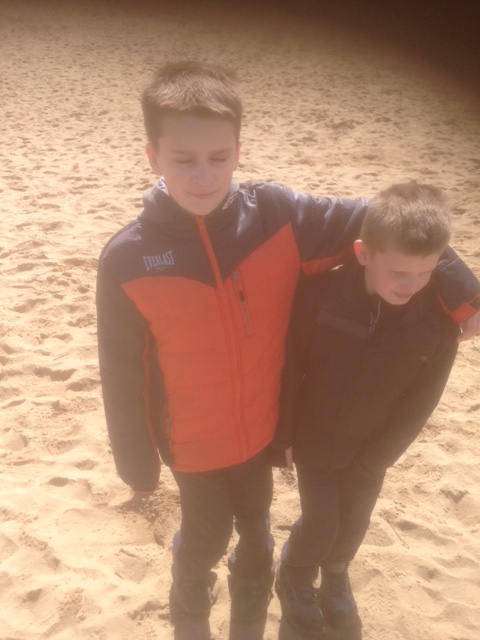 There’s also a pebbly beach there too where I started skipping stones from one side of the river to the other. The boy’s attempts ended in abject failure, despite their ongoing training from an expert. What is it with the kids of today that they can’t skip stones? What are they teaching them at school? 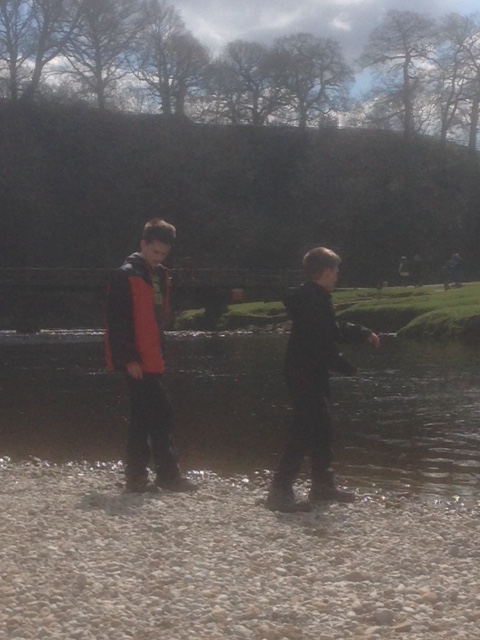 We then moved on to the stepping stones. Alex was desperate to cross them and just wouldn’t believe that they didn’t go all the way across. I’m sure they did back in the day, but ‘health and safety’ has probably led to the middle stones being removed. 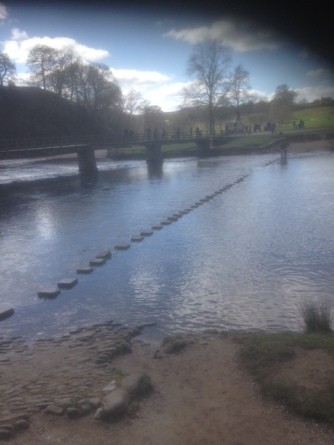 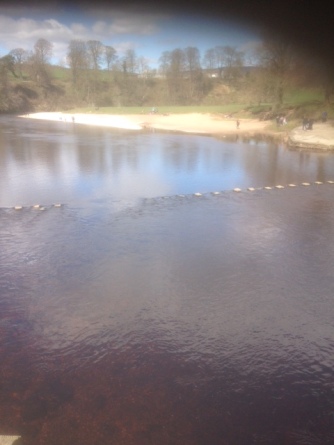 Anyhow, no sooner had I turned my back then Alex was off on a mission to try and cross the stones. Thankfully someone was in front of him, someone mooooviiinng verrrry slooooowly, which gave me the time to ‘gently coax’ him back to land. Note that no children were harmed in this ‘gentle coaxing’!

Bolton Abbey itself is truly magnificent and well worth the visit. It dates back to the 12th Century and has survived attacks from Scottish raiders and legions of tourists. It has welcomed princes and kings in the past, who stayed at the nearby lodge before going grouse shooting. 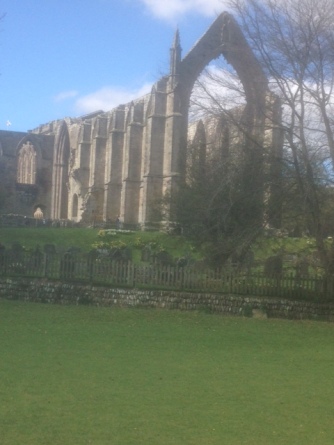 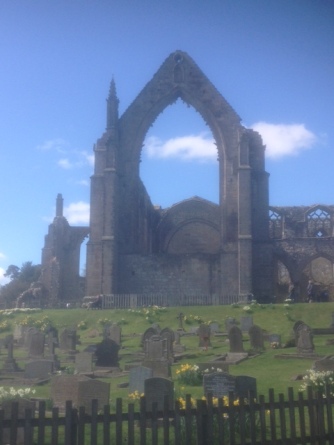 Chris found a fountain and was telling Alex he could help himself to the money that was in there. I stopped him when he’d fished out enough to pay for lunch and the car park. Now that’s a lot of change… (Only joking btw!) 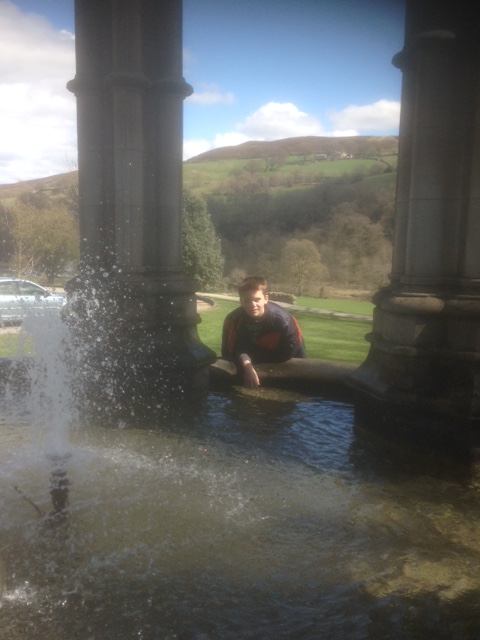 We made our way back through the car park, past hundreds of picnicking and barbequing visitors and then back home.