Scottish mountains are big, really fucking BIG. Scottish midges are small, really fucking SMALL. And after my first day of climbing the former and dodging the later, I’m not sure which has been the most challenging.

Tony and I have just invented a new word (midgerable) as we chat to each other from within the relative safety of our tents, 2 metres apart as the midges pelt against the outer wall of our tents. They are hitting the tents with such intensity that it sounds like rain. We should be outside enjoying the evening sun, watching it set as we both enjoy a dram of whiskey and a cup of disaronu. Midges truly are bastards, spoiling my first night of properly remote wild camping.

Midges define the definition of the term ‘the female of the species is more deadly than the male’. Space must have had a trip to the Scottish Highlands prior to writing that one-hit wonder.

Any thing by Midge Ure

If you can come up with anything better (not tricky!), then please add it as a comment below.

Anyhow back to Scottish mountains being really fucking BIG!

They are twice the size, and more, of the chunks of hills that I’ve been regularly climbing in the Peak District. They dominate the landscape and seem to go on and on into the distance. They are the Lake District pumped up on steroids, dominating the skyline and appear to go on and on… Munro after Corbett after Munro.

It’s just me and Tony (aka Walk Machine and the fittest man alive!) again, heading for Scotland and a few days walking in The Highlands.

Stumpy (Dave), Tony’s pal bailed 3 weeks ago and The Walking Dan made his decision not to come two days before we’d planned to set off. This left us with a problem. Who was going to drive instead of Dan. Thankfully Tony did as I was sick to death of driving having done 2100 miles in the first two weeks of my new job. After a few months off and a bit of consultancy, I’d nailed down a FT job as marketing lead for a national electrical wholesale business. Yey!

The plan for the first night was get up to Scotland late on Friday, grab a few cheeky drinks, last orders, at the Clachaig Inn, just off the road, near Glencoe, followed by wild camping a few hundred yards into the wilds!

We managed to get there for 10pm, had a few drinks, but the weather was lousy and neither of us felt like pitching in the dark in a storm. Instead we both slept extremely cosily, with the back seats down, full length, in the back of Tony’s Astra Estate, in the pub car park! Not as cramped as you’d think given that Tony is half-man, half-midget! 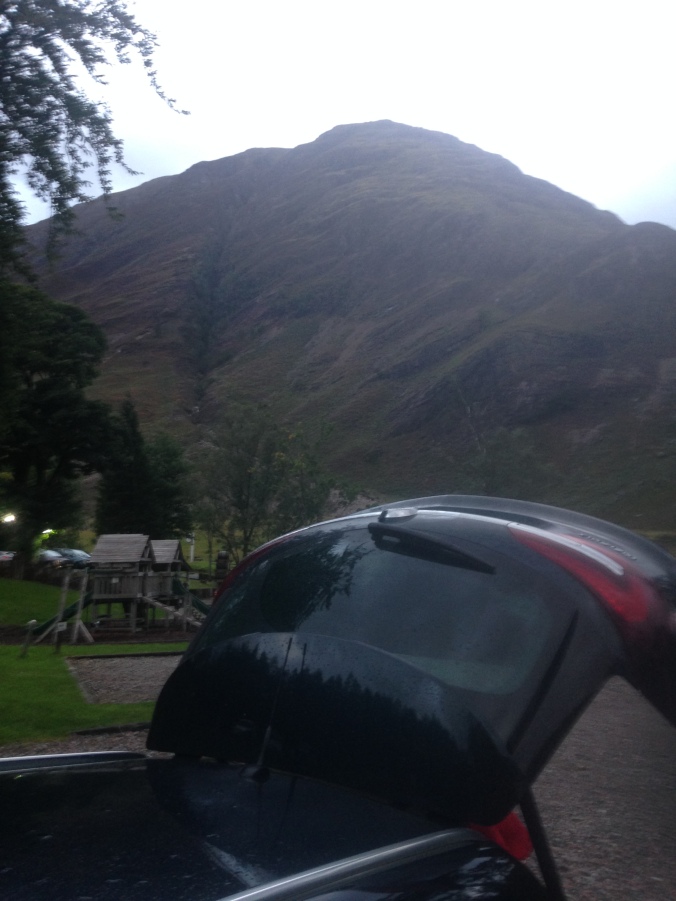 Daylight woke us early doors and having sorted the car out, we were off again. First stop was MaccyD’s in Fort William. It didn’t open til 7, so we had to wait a few mins before we could claim our brekkies.

We ate quickly, drove past Ben Nevis, and then set off to Creag Meagaidh National Park.
For this part of our adventure we only took enough kit and food for a day’s walk and a night camp. 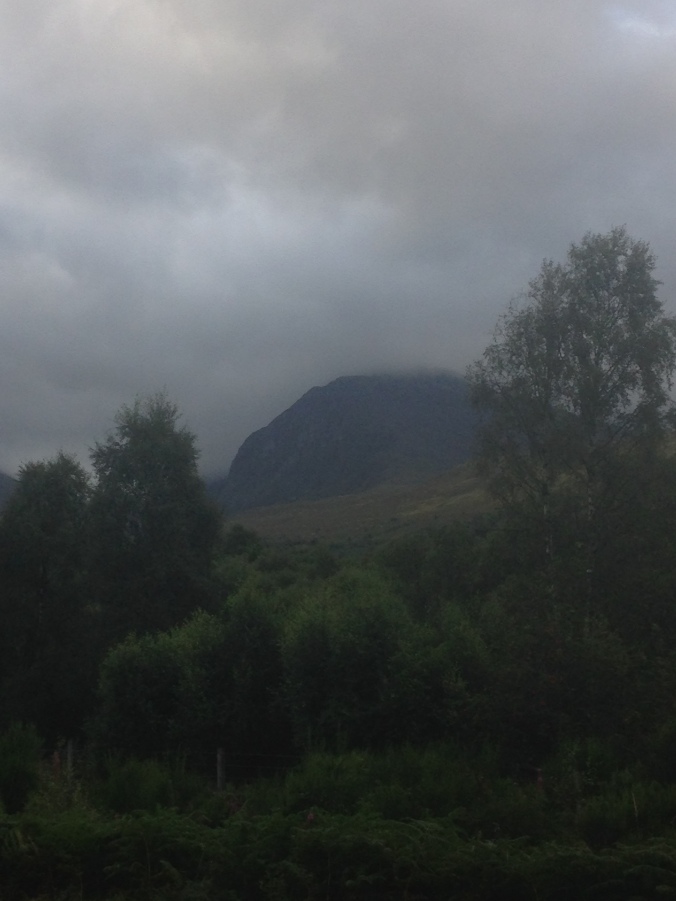 Our plan was to make a circular route to the summit of Creag Meagaidh and then find somewhere suitable to camp.

We parked in the main National Park car park on the A86, by the shores of Loch Laggan, and after the customary ‘faff’ we set off. The weather was clear as we started, and sunny, with both of us in shorts and shades.

It didn’t last long. The mist came in at around 800/900m and it was our constant companion as we skirted the Aberarder Forest and headed up Carn Liath, to at 1009m, claim our first munro of the day and the trip… and only my second ever (after Ben Nevis on my National 3 Peaks Trip). 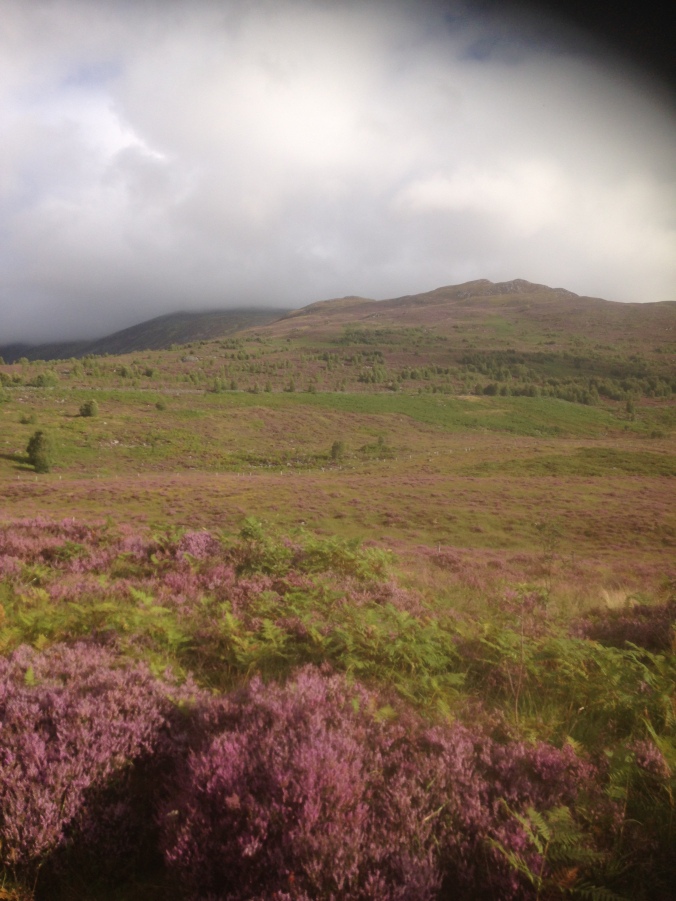 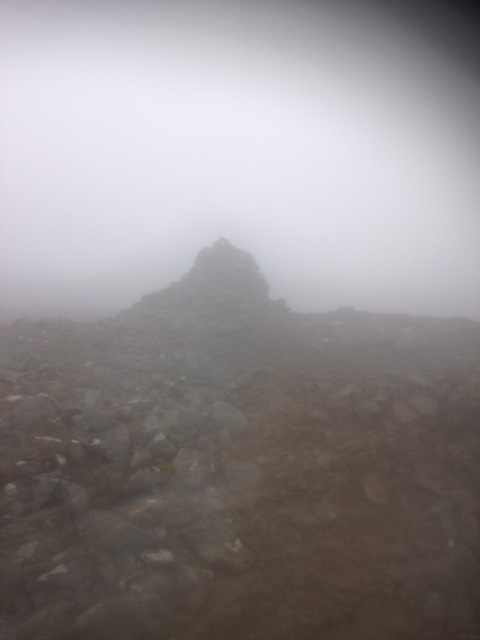 Carn Liath (and into the mist)

It was hard going with my new heavy bag. I’d both invested and upgraded a fair bit of kit this year and was getting some stick from Tony for having shiny new stuff. New backpack, new sleeping bag, new sleeping mat, new jetboil… the list goes on!

It was easily the heaviest bag I’d carried on a walk and that’s not withstanding the fact that is left my jetboil (and spork) in the car. Dinner was gonna be interesting then!

All the gear and no idea, I hear you all saying!

We spent a foggy, mysterious hour on the ridge top of Sron Coire a Criochairein hitting the top of Miall an t Sniam (969m) and Min Choire (991) before working our way towards Stob Poite Coire Ardair known as ‘The Window’, a tight cleft in the ridge-line, and our route back to the car the following day. 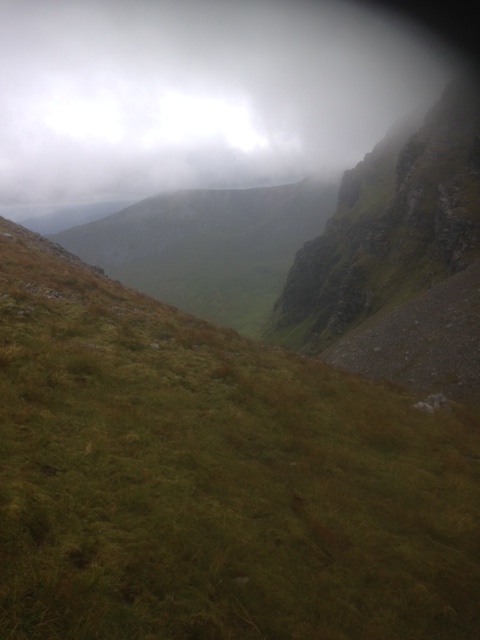 Looking over to ‘The Window’

‘The Window’ was found,  just about, as we couldn’t see to much of it due to the bad weather. We still had lunch there though. I had a bizarre, but tasty, concoction – a wrap with Spanish meat and onion bhaji. At 1050m high it was awesome, the chilli giving me a welcome boost.

Lunch done it was time to push for the summit at 1130m, which we quickly did after a stop at the strangely named ‘Laura’s Nip’. Don’t ask! 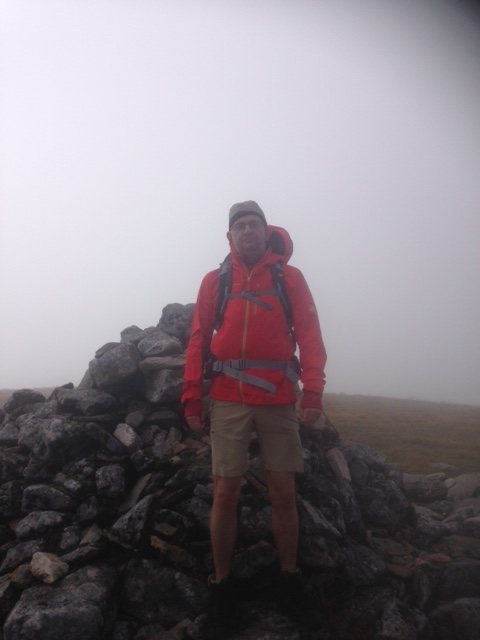 It was only a this point, after walking for 6 hours that we saw another human being, closely followed by another 3 and a dog. Creag Meagaidh is one of those route that you always want to do, I think, but you ultimately end up being seduced by something bigger and more popular nearby.

The weather at this point became extremely changeable. Misty on top, with the threat of rain and some incredible winds and cloud zooming up and over the rim of Coire Ardair. The Coire Ardair is a popular spot for climbing (summer and winter), but not today! Definitely not today!

Hopefully I’ve added the video Tony took at this point. Beware the end of the video, there’s a sight on it that would scare a police-horse. You’ve been warned! 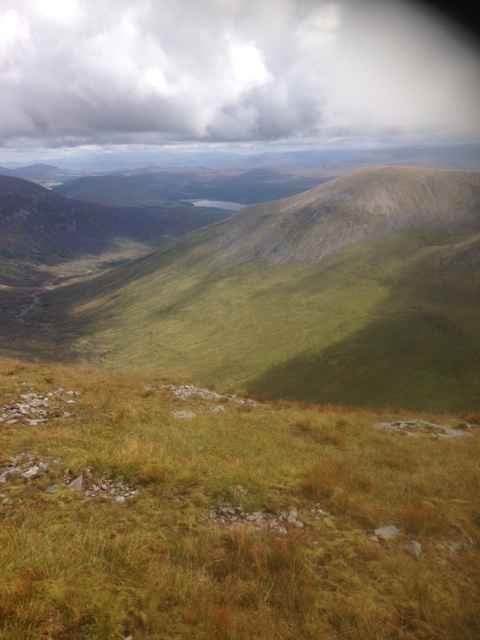 Over Coire Ardair towards Loch Laggan

Somehow, a text got through to me whilst at the top of Creag Meagaidh. 1100m up and I have a better signal than I’d have a week later at sea-level in Whitby. A rather scary message from Debbie:

‘Call me. Urgent, but not an emergency’

3 hours from the car!

My phone couldn’t get a signal, but unbelievably Tony’s did. So there I was on top of a Munro in Scotland, almost as high a you can get in the UK, phoning my wife!

Thankfully it was as described, just ‘urgent’, and not an emergency. Our muppety Building Society and Bank had somehow ballsed up on a payment and were chasing me for money I’d already paid.

Today was a short day. It was still 12 miles or so, but we were done and dusted by 3pm. We camped by Lochan Uaine, having spotted a decent looking potential spot whilst lunching near ‘The Window’ earlier.

I’m pretty sure Uaine means ‘Owen’. What a co-incidence. Unbelievable! Although someone will now comment and tell me it means ‘Green’. I’ve seen a few translations. 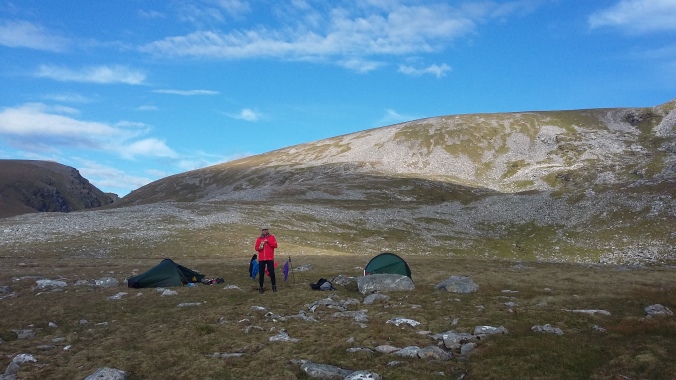 Awesome eh? On the banks of Loch ‘Owen’

The tents went up pretty quickly giving us time to do a quick tour of our locale for the evening, and from the top of Carn Dearg (888m) we discovered a secret valley… beautiful, in the middle of nowhere between the Forests of Braeroy and Corrieyairack.  It doesn’t even have a name on the map.

My first wild camp meal was awesome, once I was able to borrow Tony’s jetboil. Freeze-dried Nasi Goreng supplemented with chicken noodles. Eaten with the sun beating down on us, as the weather had made a turn for the better once we’d camped. 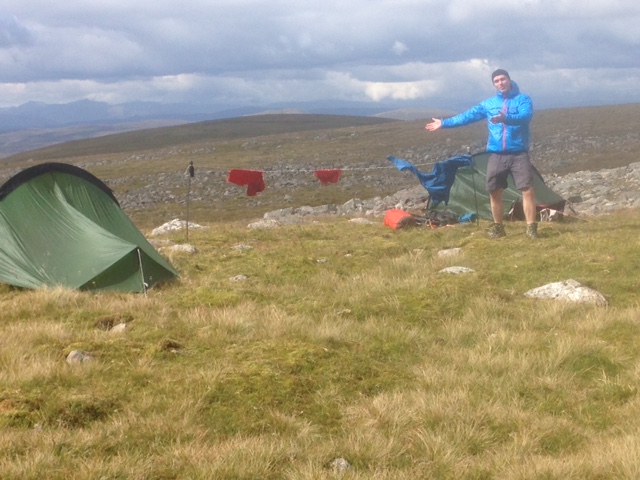 Could it get any better? Yup, it could!

After missing a couple of deer earlier in the day, due to not getting up a few hills as quickly as Tony, a herd of 25 wild deer (all shapes and sizes) careered down Creag Meagaidh towards us. To be fair they must have smelt us a way off as they soon changed direction to head up the opposite hill, to the ridge we’d walked along in the morning. A spectacular and unforgettable moment.

The ridge behind heads up to Creag Meagaidh

Could it get even better? Course not! It was midge-time!

Finishing dinner we washed up and we’re settling down for more whiskey and disaronu, when the wind dropped and the curse of Scotland rose from the heather. Midges, hundreds if not thousands or millions of them (gazzilions according to Tony). We fled for our tents. And watched as they attacked the outside of the outer part of our tents. And bounced around the inside too. A fair made into into the inner sanctum of the inner tent before I could zip them out. These I mercilessly beat to death with my cap. I mentioned earlier it sounded like rain as they beat against the tent. Naïve old me stuck my hand out to check! A seriously schoolboy-esque error as I got a ‘midge glove’ as a reward and a whole load more midgeyfuckahs to cap to death.

And that was it. The little bastards weren’t going away, so we called it a night.

Tomorrow was going to be an early start, hopefully before the midges got up for breakfast, and a trek back to the car before heading off to The Cairngorms.